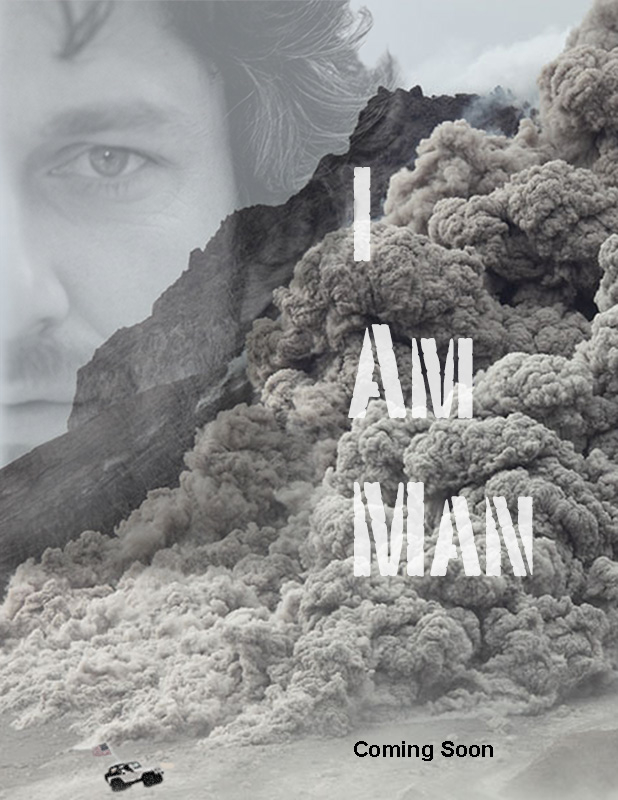 Process:  I wanted to make a fake promotional movie poster so I got three photos: Gerard Butler, a jeep going uphill, and a pyroclastic cloud from google images. In Photoshop, I added the pyroclastic cloud as my background layer, the jeep as the secondary layer, and Gerard Butler as the final layer. I created masks to both the jeep and Gerard Butler layers and used the paintbrush tool to erase their backgrounds. I lowered the saturation on the jeep in order to blend in with the grey color of the pyroclastic cloud layer and used the filter diffuse glow in order to have a grimier look on the jeep. I cut the photo of Gerard Butler in half, dragged it to the edge of the background layer, and then lowered the opacity down to 59% to have a transparent effect. I used a white PortagolTC TT text as my main titles and an Arial bold for my poster information.

3. I misplaced the link for the Gerard Butler image.

Description: I created a montage for a fake book cover for a novel called “The Deep.”

Process:  I discovered images of a underwater cave, a scuba diver, and a skull from the internet and imported them into Photoshop. Using the various tools in the program I made layers  for each image with an accompanying mask.  I proceed to erase the backgrounds off the images of the scuba diver and skull. With the selection tool I placed the images into the middle of the deep pool image and then put the skull image on the far left side of the page. I used the Sprayed Stokes filter over the skull layer and lowered the brightness levels on the background layer. For the text, I downloaded the movie font from the movie “Final Fantasy” and it used it as my main title for the book cover. I used the Myriad Pro font for the body copy.

View this document on Scribd

Description: Its an image of a bunch of pool balls I took from my apartments lounge.

Process: After I had taken my photo I inserted it into Adobe CS6 Photoshop. From there, I cropped the image 6 x 6  and placed it on a 8.5 X 11 document.  I used the selection tool over pool ball #3, and inverse the selection so the rest of the image would be selected instead of the pool ball. I lowered the background’s saturation to zero, and  used the Sprayed Strokes Filter all over the image. I raised the hue to +39 making the background dark blue and pool ball# 3 orange.

Process:  I went down to my apartment’s lounge and took some photos of the pool table.  My girlfriend and I love playing pool so I thought it would be cool.  I favored the pool ball # 2, so I arranged it to the side to be my main focus, and placed the other pool balls farther away from the focus so it would follow the rules of thirds. After I took my photo, I went to a computer lab and uploaded it to Photoshop. I watched the instructional videos from Brainhoney to understand the editing process. I re-sized the photo to 6 X 6 and then used the lassoed tool around pool ball # 2. I cropped the photo and de-saturated the background with the exception of the pool ball. I then overlaid it with the plastic wrap filter and then raised some dark purple color in the background.